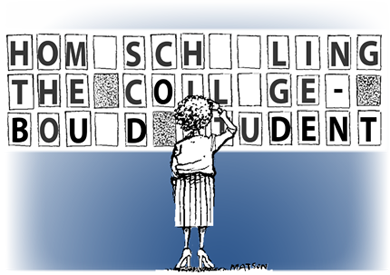 The number of homeschooled students in the United States has grown in recent years, according to the US Department of Education.

As more and more people are homeschooled, the number of homeschoolers who want a college education will undoubtedly grow. The college application and selection process can be intimidating for any student, but it can be even worse for those who are homeschooled.

I was homeschooled from fifth grade all the way through high school. I can attest to the struggle of the college application process felt by homeschoolers and other students who did some other form of non-traditional schooling.

To begin with, I did not have an official GPA or high school transcript. My class rank was meaningless, since I was the only student in my grade. I really had no way to prove that I would be able to handle college-level education, to college admissions officers or to myself.

I took the PSAT, the practice test for the SAT, my sophomore year. I was slightly nervous; it was my first standardized test since state testing in fourth grade.

However, the hardest part of the test was figuring out which school code to use to denote that I was homeschooled so the testing company knew no high school needed to receive a copy of my score.

We never found that code. The office lady gave up looking and filled in their school code, meaning they would receive a copy of my score.

At first I was slightly angry that they would get to see my score. After all, it was none of their business how well I did on it. However, they seemed somewhat impressed with my score. That was the first time I had solid proof that I was on the same level as all of the other kids my age.

I decided to take both the ACT and the SAT my junior year, since I had no other quantitative data to prove to admissions counselors what I knew. Those went much smoother. I was also able to find the code to use to show that I was homeschooled, which made me much happier.

Wait. What’s on a Transcript?

The other major challenge I faced when filling out college applications was the need for an official transcript. What exactly counts as official? I didn’t have an office where I could send the little postcards the colleges provided to request a transcript.

Some universities had materials available for homeschooled students. Others I spent quite a bit of time talking on the phone and emailing admissions counselors trying to figure out what they want and what exactly is on a high school transcript.

I ended up writing my own transcript and having my parents sign it.

Getting into college was extra work and took extra, but it was worth it. I got into my first choice, Drake University, and am currently finishing up my sophomore year.

And just in case you were curious, I found materials for homeschoolers on one of their biggest competitors websites (which I also applied to and was accepted to), cut their name and logo off the top, and sent it to Drake.